Panchita, 101-year-old who lives an active and healthy lifestyle in one of the Blue Zones, the Nicoyan Peninsula of Costa Rica. She is healthy, happy and could teach most of us a thing or two.

While genetics somewhat determine your lifespan and susceptibility to these diseases, your lifestyle probably has a greater impact.

A few places in the world are called “Blue Zones.” The term refers to geographic areas in which people have low rates of chronic disease and live longer than anywhere else.

This article describes the common lifestyle features of people in Blue Zones, including why they live longer.

What Are Blue Zones?

“Blue Zone” is a non-scientific term given to geographic regions that are home to some of the world’s oldest people.

It was first used by the author Dan Buettner, who was studying areas of the world in which people live exceptionally long lives.

They are called Blue Zones because when Buettner and his colleagues were searching for these areas, they drew blue circles around them on a map.

Although these are the only areas discussed in Buettner’s book, there may be unidentified areas in the world that could also be Blue Zones.

A number of studies have found that these areas contain extremely high rates of nonagenarians and centenarians, which are people who live over 90 and 100, respectively (1,2, 3).

Interestingly, genetics probably only account for 20–30% of longevity. Therefore, environmental influences, including diet and lifestyle, play a huge role in determining your lifespan (4, 5, 6).

Below are some of the diet and lifestyle factors that are common to people who live in Blue Zones. 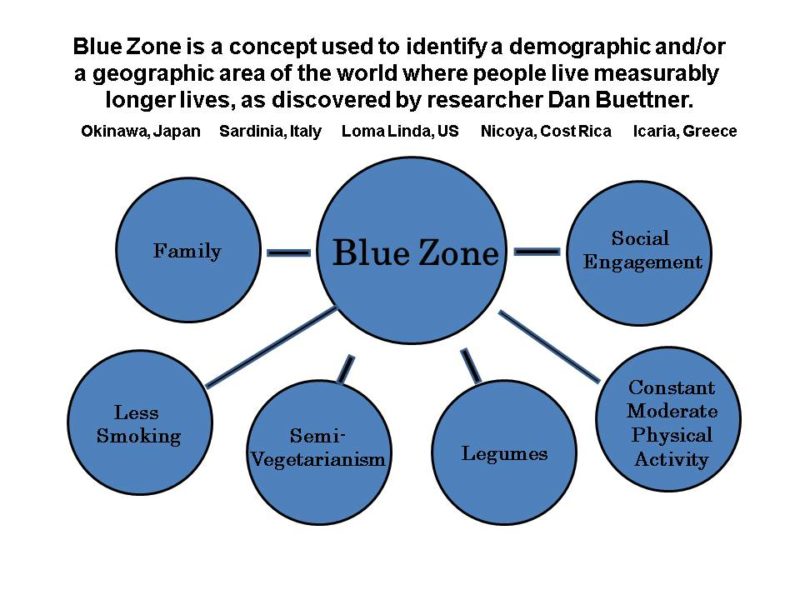 One thing common to Blue Zones is that those who live there primarily eat a 95% plant-based diet.

Although most groups are not strict vegetarians, they only tend to eat meat around five times per month (7, 8).

A number of studies, including one in over half a million people, have shown that avoiding meat can significantly reduce the risk of death from heart disease, cancer and a number of other different causes (9, 10).

Instead, diets in the Blue Zones are typically rich in the following: 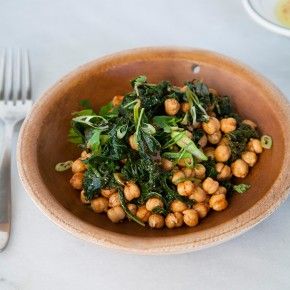 Other habits common to the Blue Zones are a reduced calorie intake and fasting.

A large, 25-year study in monkeys found that eating 30% fewer calories than normal led to a significantly longer life (25).

Eating fewer calories may be contributing to the longer lives in some of the Blue Zones.

For example, studies in the Okinawans suggest that before the 1960s, they were in a calorie deficit, meaning that they were eating fewer calories than they required, which may be contributing to their longevity (26).

Furthermore, Okinawans tend to follow the 80% rule, which they call “hara hachi bu.” This means that they stop eating when they feel 80% full, rather than 100% full.

This prevents them from eating too many calories, which can lead to weight gain and chronic disease.

A number of studies have also shown that eating slowly can reduce hunger and increase feelings of fullness, compared to eating rapidly (27, 28).

This may be because the hormones that make you feel full only reach their maximum blood levels 20 minutes after you eat (29).

Therefore, by eating slowly and only until you feel 80% full, you may eat fewer calories and feel full longer.

In addition to consistently reducing overall calorie intake, periodic fasting appears to be beneficial for health.

For example, Icarians are typically Greek Orthodox Christians, a religious group that has many periods of fasting for religious holidays throughout the year.

One study showed that during these religious holidays, fasting led to lower blood cholesterol and lower body mass index (BMI) (30).

Many other types of fasting have also been shown to reduce weight, blood pressure, cholesterol and many other risk factors for chronic disease in humans (31, 32, 33).

They Consume Alcohol in Moderation

Another dietary factor common to many of the Blue Zones is moderate alcohol consumption.

There is mixed evidence about whether moderate alcohol consumption reduces the risk of death.

Many studies have shown that drinking one to two alcoholic drinks per day can significantly reduce mortality, particularly from heart disease (34).

However, a very recent study suggested that there is no real effect once you take into consideration other lifestyle factors (35).

The beneficial effect of moderate alcohol consumption may depend on the type of alcohol.

Red wine may be the best type of alcohol, given that it contains a number of antioxidants from grapes.

Consuming one to two glasses of red wine per day is particularly common in the Icarian and Sardinian Blue Zones.

In fact, Sardinian Cannonau wine, which is made from Grenache grapes, has been shown to have extremely high levels of antioxidants, compared to other wines (36).

Antioxidants help prevent damage to DNA that can contribute to aging. Therefore, antioxidants may be important for longevity (37).

A couple of studies have shown that drinking moderate amounts of red wine is associated with a slightly longer life (38).

However, as with the other studies on alcohol consumption, it’s unclear whether this effect is because wine drinkers also tend to have healthier lifestyles (39).

Other studies have shown that people who drank a 150-ml glass of wine every day for six months to two years had significantly lower blood pressure, lower blood sugar, more “good” cholesterol and improved sleep quality (40, 41).

It is important to note that these benefits are only seen for moderate alcohol consumption. Each of these studies also showed that higher levels of consumption actually increase the risk of death (42).

Exercise Is Built Into Daily Life

Aside from diet, exercise is another extremely important factor in aging (43).

In the Blue Zones, people don’t exercise purposefully by going to the gym. Instead, it is built into their daily lives through gardening, walking, cooking and other daily chores.

A study of men in the Sardinian Blue Zone found that their longer life was associated with raising farm animals, living on steeper slopes in the mountains and walking longer distances to work (44).

The benefits of these habitual activities have been shown previously in a study of more than 13,000 men. The amount of distance they walked or stories of stairs they climbed each day predicted how long they would live (45).

Other studies have shown the benefits of exercise in reducing the risk of cancer, heart disease and overall death.

The current recommendations from the Physical Activity Guidelines for Americans suggest a minimum of 75 vigorous-intensity or 150 moderate-intensity minutes of aerobic activity per week.

A large study including over 600,000 people found that those doing the recommended amount of exercise had a 20% lower risk of death than those who did no physical activity (46).

Doing even more exercise can reduce the risk of death by up to 39%.

Another large study found that vigorous activity led to a lower risk of death than moderate activity (47).

They Get Enough Sleep

In addition to exercise, getting adequate rest and a good night’s sleep also seem to be very important for living a long and healthy life.

A number of studies have found that not getting enough sleep, or getting too much sleep, can significantly increase the risk of death, including from heart disease or stroke (48, 49).

A large analysis of 35 studies found that seven hours was the optimal sleep duration. Sleeping a lot less or a lot more than that was associated with an increased risk of death (50).

In the Blue Zones, people tend not to go to sleep, wake up or go to work at set hours. They just sleep as much as their body tells them to.

In certain Blue Zones, such as Icaria and Sardinia, daytime napping is also common.

A number of studies have shown that daytime naps, known in many Mediterranean countries as “siestas,” have no negative effect on the risk of heart disease and death and may even reduce these risks (51).

However, the length of the nap appears to be very important. Naps of 30 minutes or less may be beneficial, but anything longer than 30 minutes is associated with an increased risk of heart disease and death (52).

Other Traits and Habits Associated With Longevity

Aside from diet, exercise and rest, a number of other social and lifestyle factors are common to the Blue Zones, and they may contribute to the longevity of the people living there.

The Blue Zone regions are home to some of the oldest and healthiest people in the world.

Although their lifestyles differ slightly, they mostly eat a plant-based diet, exercise regularly, drink moderate amounts of alcohol, get enough sleep and have good spiritual, family and social networks.

Each of these lifestyle factors has been shown to be associated with a longer life.

By incorporating them into your lifestyle, it may be possible for you to add a few years to your life.