I buried my grandmother four years ago, after she lost her battle with a stage-4 glio blastoma brain tumor at the age of 70. The days after her death would turn into a mirage of blurred moments of vast disconnection, a growing awareness of the grave danger of the toxicty that surrounds us and the pointlessness of materialism. Nothing quite puts life into perspective like losing someone close to you, especially when you watch them slowly disappear to such a devastating disease.

At the time, I had no idea that for me her death would signal the beginning of a new, purposeful journey into health and a deeper connection.

Prior to her death I went from an incredibly exciting marketing and advertising career to a sabbatical of some sort – living in South-East Asia. This sparked my love affair with nature and wholefoods, mostly because I got really ill from traveling but also because I began to see the correlation between what we choose to put into our mouths and how significant of an impact it has on our lives. After my gran’s passing, I moved to Cape Town. Although I did so without having a real plan. I thought it would be a nice place for me to clear my head.

I began teaching English in the city and watching documentaries about climate change. One day, after watching the 11th hour, I found myself in a heap, feeling totally devastated. It was like an apocolyptic veil had been lifted, I could see, for the first time, that we were facing a complete ecological meltdown and that our species, along with most others was on the verge of a mass extinction.

I didn’t know what it was I was going to do, but I did know that there was no point persuing a career as humanity disintegrated and the planet was poisoned right before my eyes. I felt compelled to spend my days in service of people and the planet.

One day whilst meditating, a name came to me. Happy. Earth. People. I shot up and Googled the URL, happyearthpeople.com was available and I immediately registered the domain.

I knew that the world needed legumes, and the more I studied about how incredible they are nutritionally for people and environmentaly for the planet, specifically for soil, the more head-over-heals in love I fell with them.

In a stroke of sheer luck I met Sonia Silabele, a recent CPUT grad in food technology. She helped me devise a series of steps on how to turn lentils into pasta, we also manged to get some of the raw materials necessary to start our pasta-making trials. Unfortunetly, at that stage Happy Earth People (ie. me) could not afford to keep Sonia employed and she was offered a full-time position at another company. So sad that we had to part ways.

I knew that if Happy Earth People was going to be a catalyst for any kind of tangible change, we would need to become a revenue-generating machine. So I started to read stories about conscious capitalism and opening my mind to the idea of social entrepreneurship. What started out as an intention to spend my time in a way that was of benefit to the greater good, was becoming a thought-through plan, that I knew would not only need skills in marketing and advertising, but even more importantly finance.

My old school friend, Candice had recently moved to Cape Town and had been working for a health-food company as a general manager. She was an incredibly organised financial whizz and if she were to entertain the idea of this eco-revolution then Happy Earth People would stand a real chance in the intimidating business world.

Having battled some very serious health issues of her own, the mission to share wholefoods and wholesomeness resonated with Candice immediately. She said “Yes”and we rolled out our very first lentil pasta together, in her kitchen, with a wine bottle no less! To this day I cannot believe the faith and conviction she showed in my vision back then.

We took all our savings, gathered all our courage and took a massive leap of faith. We bought our first pasta machine, and asked politely for Candice’s brother, Gareth, to move into the tiny storage room at the back of his IT business so that the two of us could make lentil pasta.

We began spending our days pushing and pulling pasta by hand, day and night. We started figuring out our sercret recipe, listening to a lot of research on wholefoods, nutrition and the benefits of using legumes in your diet. We were a force. A force in it’s very early days, but a force none the less…

Time to sell our wares

Excited to share our one-of-a-kind creations, we began selling cooked dishes at the OZCF market in Granger Bay at the Waterfront. We learned a lot in a short space of time, the market research and customer feedback was fundamental to our growth.

Soon enough retailers began to catch wind of our products, we needed to get a bigger machine but with being opreational for less then a year it was virtually impossible to get a loan. We were broke, though bright-eyed.

Thankfully, we were able to borrow some money from my mum and order a slightly bigger machine from Italy. We geared up our food and saftey compliance and suppliers, which meant we could start to move into the bigger retail space.

About a year ago, we were approached with an investment opportunity. Candice was 40 weeks pregnant, and we were just about to close the deal, that we so desperately needed in order to upscale our business. We had already outgrown our new equipment and were struggling to keep pace with our orders. To be honest, we needed a new, bigger machine urgently and were working tirelessly to make an attractive investment case.

It was then we got the gut-wrenchingly awful news that a premier retailer was stocking products uncannily similar to ours.

investor wanted us to secure this retailer, which we tried to do. Having offered them an excellent offer, we were turned down. We lost the investment deal and were unable to get the new equipment as planned. We were in debt, broke and had been eating lentil pasta for a year, we had hit our lowest point.

There we sat, wondering if we should get “real” jobs! By the will of God I managed to secure a scholarship (that my mum had convinced me to apply for, even though I had zero spare time) doing the Social Entrepreneurship Program at Gordons Institute of Business Science, which meant we could finally complete a meticulously detailed business plan.

Yet there we were, down and out. Broke. The mission to do good, had to become one of concious capitalism if we were going to survive and have an inkling of hope to continue persevering at something we so strongly believed in. We had tried so many avenues, banks, short-term loans, bridging finance, grants, you name it. It felt impossible to get the funds necessary to grow and stay afloat.

Our hard work starts paying off

By now our pasta machine was also on it’s last legs, we anxiously navigated two pasta extruder breakdowns earlier that year and were literally powering that machine on hopes and dreams. We needed a new machine ASAP, so we decided to apply for funding through Old Mutual’s enterprise development program.

Then we got a call.

The Head of innovations at Pick n Pay wanted to meet with us and try our products. It was time to put on our big-girl pants.

Just when it felt like our luck had run dry, we found ourselves at PNP HQ chatting to a team of phenomenal women. Not only did they truly believe in our products, they also had an enterprise & supplier develpoment program. One that assists small businesses to grow and flourish, with the aim of impacting the South African economy at a very assessable level.

Time to muster up some courage

We knew we couldn’t possibly take on a contract with Pick n Pay without getting a new machine, we simply didn’t have the capapcity. But, there was also no way you say “no” to the opportunity of a lifetime. We took a leap of faith and were transparent about our circumstances, we explained that we were in the process of applying for funding to purchase a new machine that we could not otherwise afford and if they would so graciously agree to document our meeting then we could take it forward in good faith to our prospective funders. Their good faith allowed us to forecast for one of the biggest South African retailers in our business plan. It was literally a chicken before the egg kind of situation.

To our great delight they were understanding, and agreed to back us through the process. We submitted our business plan, which Candice and I updated to include forecasts, which included Pick n Pay.

After nine rounds of screening, a due dilligence that would have made even the most seasoned of business executives crack – a freshly cooked pasta dish delivered to the very boardroom where the decision makers sat. We sat with bated breath as the representatives who were building the investment case presented to the board and investment committee.

“Tea we got the funding…” It was Candice on the other side of the phone. Tears of joy began to roll from my eyes, accompanied by a massive sigh of sheer relief. But there was no time to celebrate. We needed to get our equipment order on route, fresh out of Italy.

Nothing could ever prepare me for the  steepness of the learning curve of running a business, if you don’t know something you learn it, simple. If you don’t understand something, figure it out. If you cant do something, make a plan.

If you had asked me that faithful day I decided I wanted to spend my days in service of humanity, sharing wellness and eco-consciousness, if I knew then what I know now. How tough it would be. I would take a long, deep breath and maybe even ask for some time to really think it through. In all honesty, I would still say “Yes”. Because, you can’t unknow what you know. And if there is one thing I know for sure, it’s that when you find something you truly believe in, something you believe will be good for others – You can’t hide from it, because every part of your being genuinely cares about seeing people happy and healthy on this beautiful rock we get to call home.

Our pasta machine and dryer arrived in August 2019, it took us a month to set up and figure out but we are beyond proud to say that we are manufacturing the most delicious, good for you and your family, legume pasta, right here on South African soil.

We’ve employed four women, increased our staff contingency at our manufacturing facility and the ripple effect of upscaling has been significant – and includes a wonderful merchandising company who recently employed over 90 youth. And you know what, we could not have done it without the phenomenal corporates who picked us up when we were down and our customers who love our products and believed in our mission from day one.

There’s still a lot to be done and many business lessons to learn. Sadly, more and more people are getting sick, and we are in a deepening climate crises. Accept now it reminds me of the story of the hummingbird, that took water bit by bit in it’s little beak, to put out a blazing fire that was burning down the forest who said: “I am doing what I can.” 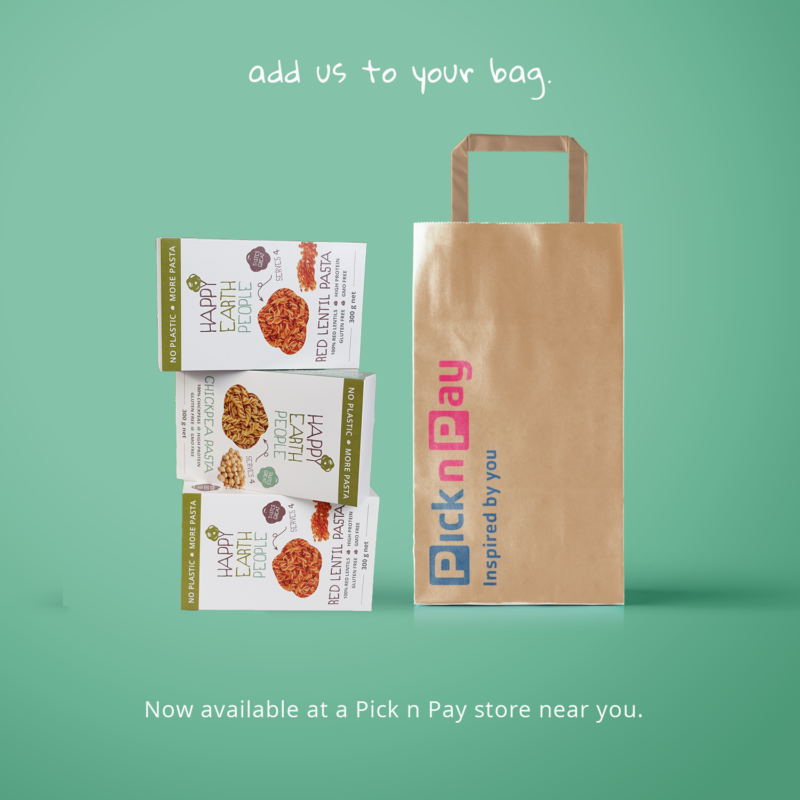 In gratitude and with love,